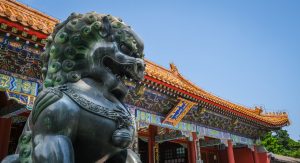 The answer, of course, is both. Which begs a further question, how do we maximise the opportunities whilst minimising the threats?

The historical context behind China’s recent growth must be understood. A proud nation that was occupied by its bitter rival Japan prior to and during WW2. Despite recent efforts, public animosity remains high; a shared history of ideological totalitarian regimes and a very strong sense of pride (the concept of “face”) which doesn’t seem to allow compromise – at least not in public.

All this contributes to creating a difficult partner to deal with in terms of global diplomacy and trade. Add to that China now out-stripping the US as a manufacturing economy and its very significant military capacity, and the answer to the second question above seems difficult to fathom.

In this wider, global context, the election success of Joe Biden may well preface a softening of US attitudes to China. But it is striking that China has, if anything, become more willing to engage and compromise when faced with the more aggressive US position under the Trump Presidency. The reverse-Kissinger approach of wielding a big stick then talking quietly behind closed doors appears to have worked. Will a Biden Presidency allow those gains to be eroded? Only time will tell.

In other areas, China has rejected Western concerns over its behaviour. Whether this is its treatment of the Uigur Muslims or Falung Gong, its actions in Tibet, and continuing claim of Taiwan. No international action seems to change its ways. Most recently, much noise was made about its decision to impose new laws on Hong Kong, but this has not stopped China from pressing on, and just this month elected members of Hong Kong’s Legislative Assembly were suspended by decree.

China’s relationship with Russia on the UN Security Council largely prevents any meaningful criticism at this level. And internal challenges to the policies of the Chinese Communist Party are limited, not least because of control over press freedom and access to information. The “Great Firewall of China” consists of 30,000 people censoring the internet, and China ranks 173rd out of 178 nations on the Index of Press Freedom.

So, it seems unlikely that there will be any awakening of popular discontent in China as most citizens don’t have the global context, however, even if they did, those who might act appear to be benefiting from China’s economic resurgence.

That said, the property-owning, Chinese middle classes do seem to want more control over their lives. It may be a slow-burn, but a desire for a greater say may well build as prosperity expands further. Especially as more Chinese travel to foreign countries and witness liberal, western democracy in action.

It is in the economic sphere where the greatest opportunity exists. China has a $13.6 trillion economy, (2018 figures) but that is spread across 1.4billion people giving a GDP per head of under $10,000. When compared with the US at $63,000 per head and the UK at $43,000 per head, it’s clear there is a lot of potential purchasing power available should China continue to grow at the pace it has over the past twenty years.

When China was admitted to the WTO in 2001 it began a process which has undoubtedly benefited western consumers as well as many Chinese people, as growth in trade between China and other nations can be used as a means to secure wider goals in both human and economic rights. This progress will require resolve from the West and other advanced and developing nations, working with China and remaining patient with its occasionally aggressive tactics and refusal to bow to international norms.